Escorted or Guided Tour
Tony McNicol writes of his tour to Yunnan China on a tour by China Kindness Tour and booked through Tropical Sails Corp.
“It was, indeed, a strange and half-incredible sight. A group of colored pavilions clung to the mountainside with none of the grim deliberation of a Rhineland castle, but rather with the chance delicacy of flower petals impaled upon a crag. It was superb and exquisite.” —Lost Horizon, James Hilton 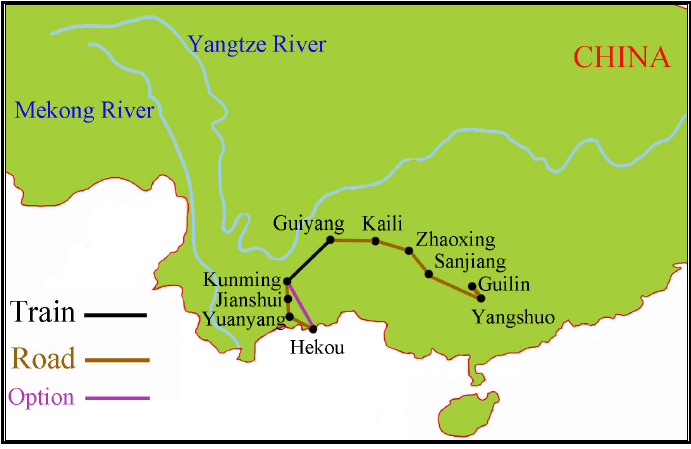 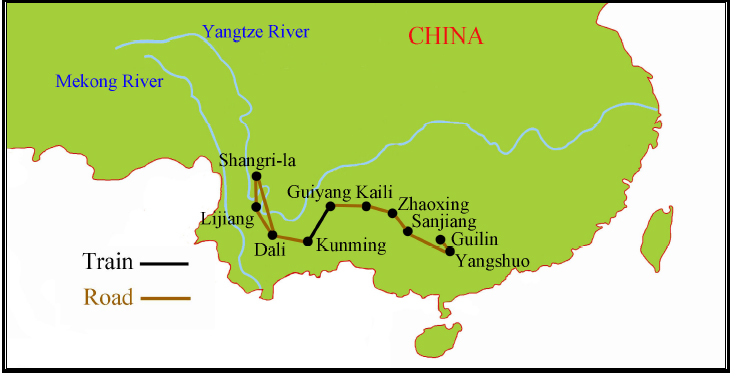 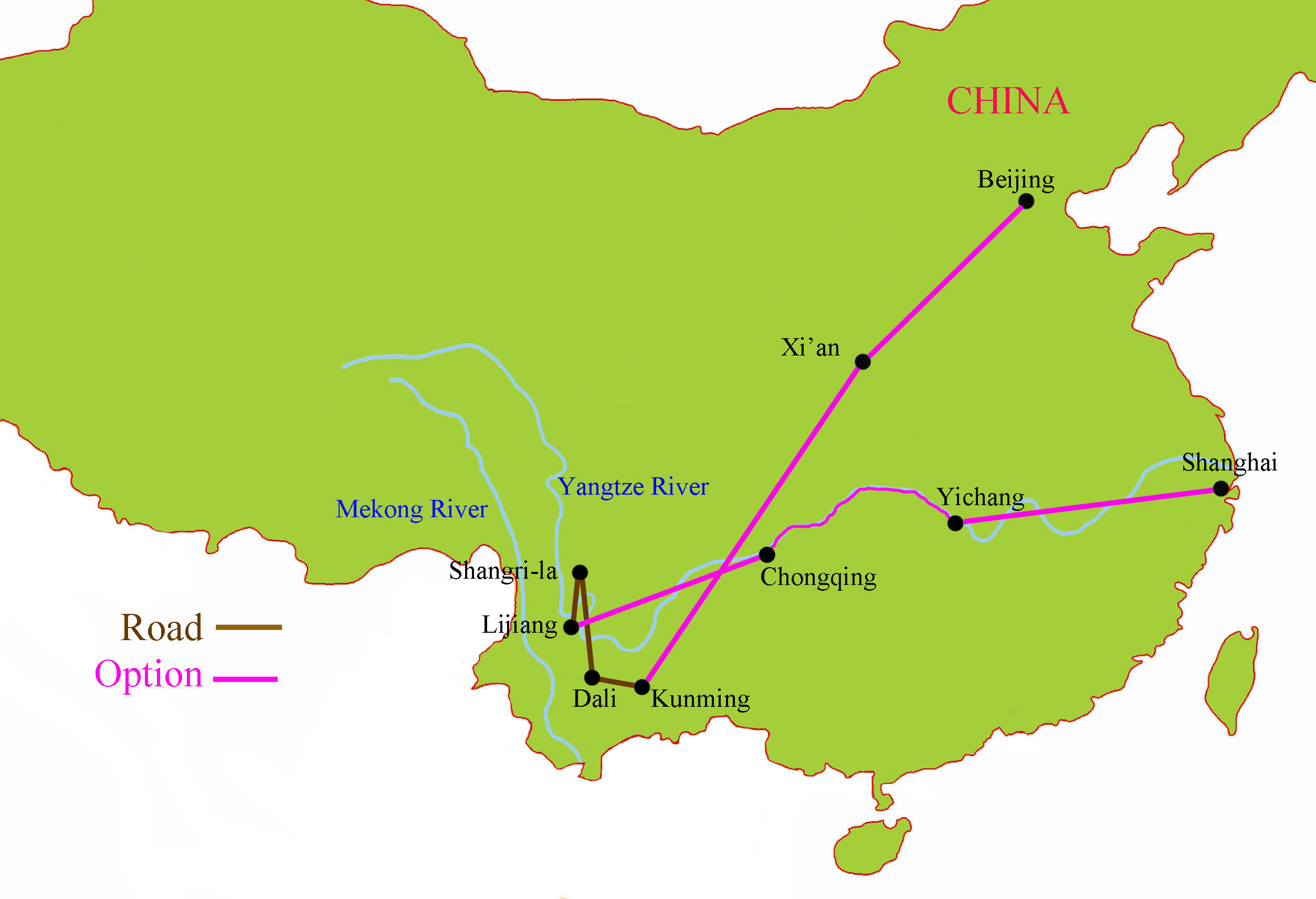 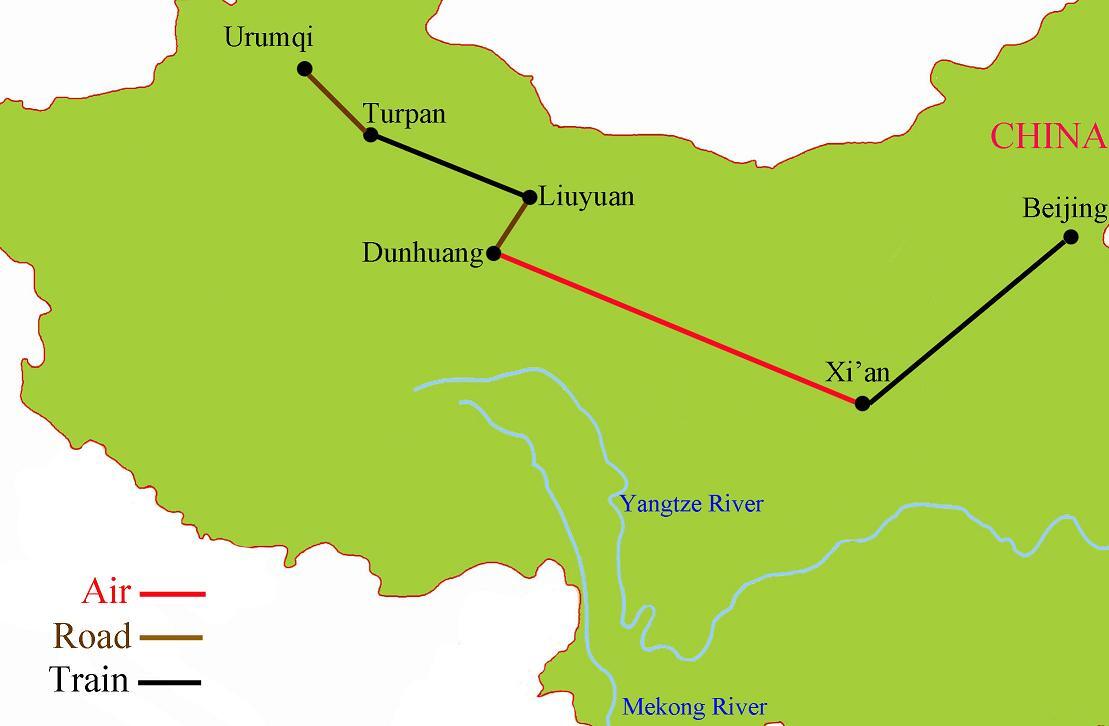 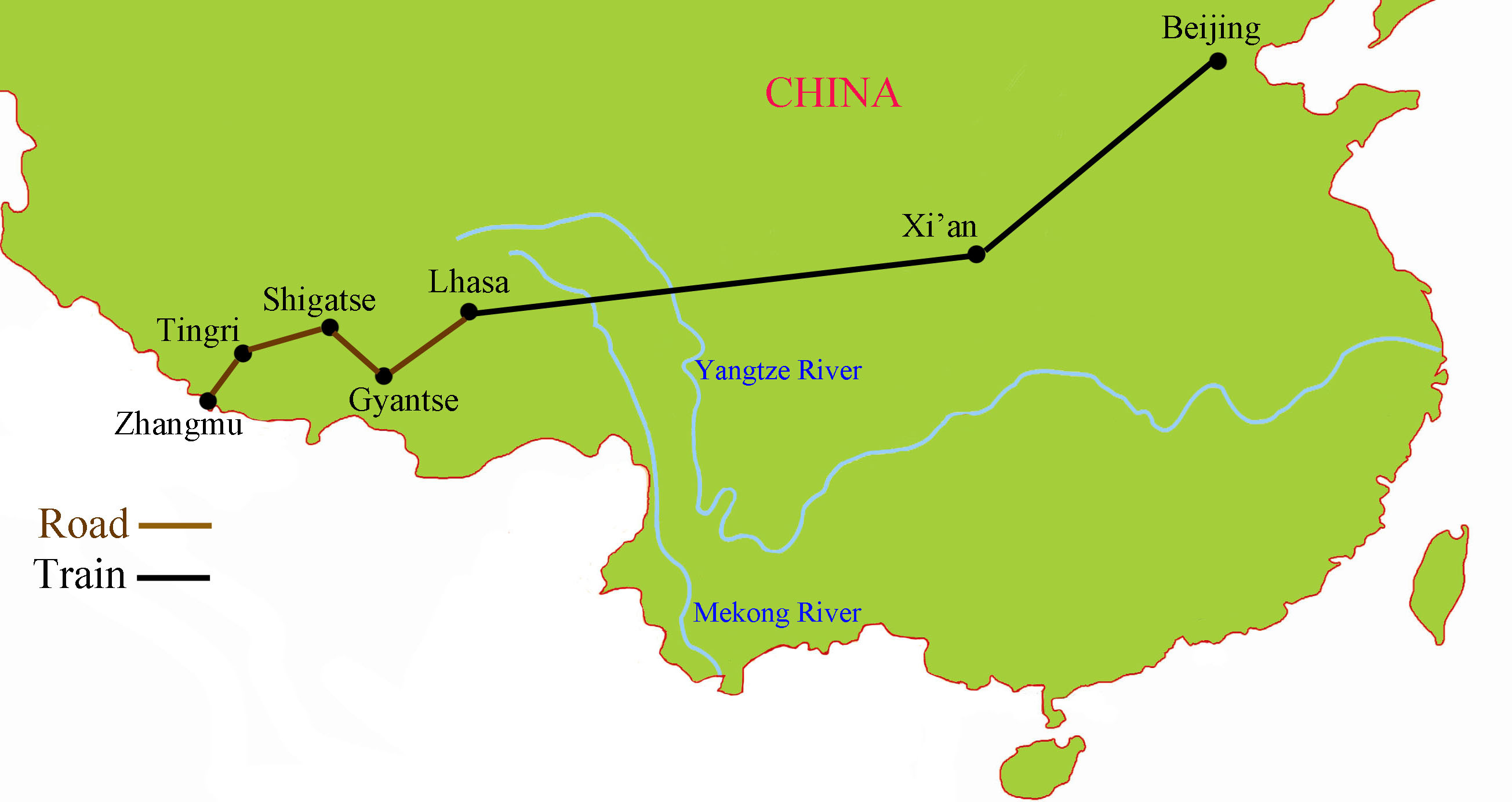 Tony McNicol writes of his tour to Yunnan, China on a tour by China Kindness Tour and booked through Tropical Sails Corp. Check out the pages on this blog for trips to China and Yunnan China.  FULL BROCHURE (large file)
SHORT YUNNAN CHINA FALL SPECIAL   UPSCALE 2014 YUNNAN TOUR & YANGTZE
FALL 2014 SILK ROAD TOUR      FALL 2014 TRAIN TOUR BEIJING XIAN TIBET
Shangri-La. Its name evokes mystery, adventure, and exoticism, an Orient of the Western imagination. The fictional Himalayan utopia was the setting for James Hilton’s bestselling 1933 adventure novel, Lost Horizon. So it might come as a surprise to find that, despite its fictional origins, Shangri-La is very much real. Or, to be more precise, a town in the north of China’s Yunnan Province has been officially renamed Shangri-La.
My own journey to Shangri-La wasn’t quite the gripping yarn of Lost Horizon. Unlike the protagonist of Hilton’s novel, I didn’t encounter any spies, bandits, or 200-year old lamas. But it did involve a fantastic journey through Yunnan, one of China’s most remarkable provinces.
Yunnan China is astonishingly diverse, even for a country as huge and varied as China. It has 28 recognized ethnic groups, more than any other China province. Its terrain ranges from sweltering jungle in the south—close to its borders with Vietnam, Laos, and Myanmar—to frozen Himalayan foothills in the north. Southern Yunnan is barely above sea level, but in the north, it rises to over 5,000 meters. Amazingly, these two extremes are only separated by around 900 kilometers. Hence, Yunnan’s famed kaleidoscope of flora, fauna, agriculture, architecture, and ethnicity. 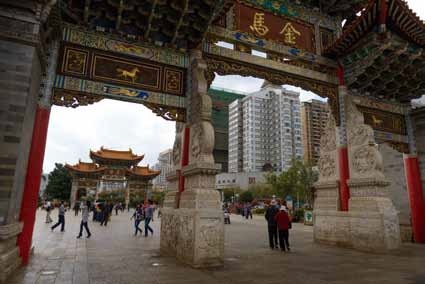 My journey started very far from Shangri-La, in more senses than one. The tour departed from Kunming, capital of Yunnan Province and nicknamed “City of Eternal Spring,” thanks to its gentle climate. The city is some 2,000 years old.
You wouldn’t immediately realize it is an ancient city, however. Nearly all its buildings are new, and like most Chinese cities, it has its fair share of construction noise and dust. As our guide for the journey up to Shangri-La, China Kindness Tours director Tony Deng jokingly put it: “Our country is one big construction site.”
Nevertheless, tradition is never far away. The day we arrived, a stone-laying ceremony for the Kunming World Trade Center was about to start. But just round the corner were shops selling disks of Yunnan’s famous puer tea and bamboo tobacco pipes looking like stumpy didgeridoos.
Stone Forest near Kunming, Yunnan China 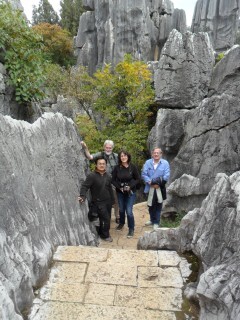 A short journey from the city are the impressive limestone formations of Shilin Stone Forest, a UNESCO World Heritage site. We found it crammed with people shuffling through the many passages between rugged spires. Here and there members of the Yi minority ethnic group posed for photographs and played traditional music for the crowds in a carnival atmosphere. But it must be an eerie place when all the visitors have gone home.
Yak Steaks, Backpackers and Pagodas
Next, we made the journey to Dali, a well-preserved and endearingly ramshackle town. It lies next to Erhai Lake and beneath the 19 peaks of the Cangshan range. Dali is sometimes called the Chinese Switzerland. If anything, however, the bars and coffee shops lining the narrow streets made me think more of a Chinese Amsterdam—though I don’t suppose Amsterdam has many cafes offering both cappuccinos and yak steaks. It was a delightful place for a stroll, bustling with young Chinese couples and boisterous schoolchildren dawdling at street food stalls on their way home.
Bad Monkey Bar Dali Yunnan 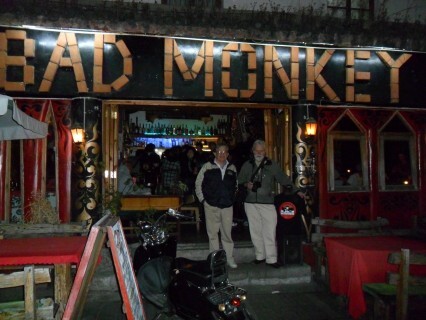 One of the busiest areas in Dali is Foreigner’s Street, which apparently dates from a time when resident foreigners were notable enough to have streets named after them. Not so now, when Dali is hugely popular with backpackers. I bumped into a young Chilean woman selling local-made cosmetics from an impromptu street store and chatting away easily in Chinese. “Dali certainly isn’t as remote as it once was,” she said, “but it’s still some way off the beaten track.” She’d lived in the town for over a year. “Most foreigners who get as far as here have a story,” she said, somewhat enigmatically. “It’s a place of sadness and happiness.” I couldn’t help wondering what her own particular story was.
Dali’s old town is unusually compact by Chinese standards. But just outside the town was the biggest monastery I had ever visited, a sprawling complex of 22 separate temples. In fact, it’s the biggest monastery in China, mostly constructed quite recently in 2005. Near the entrance, looking slightly out of place, are three millennium-old pagodas that have survived numerous natural and man-made calamities.
Serene Mountains and Misty Mornings
Our next stop after Dali would be Lijiang, another preserved ancient city. The journey was long, and we passed through village after village. The local industry of each was clear from the shops opening straight out onto the road: one, pottery; another, gravestones; and yet another, exquisite wooden carvings. Blood-red peppers hung from the eaves, drying in the sun. Corn spilled chaotically over porches. Local women were taking advantage of the fine weather to wash their hair in basins next to the curb, oblivious to the dust thrown up by passing traffic. Men stood by their gleaming motorbikes, chrome work proudly polished, and the rest caked in mud.
Dali Reflecting Pool, Dali Yunnan, China 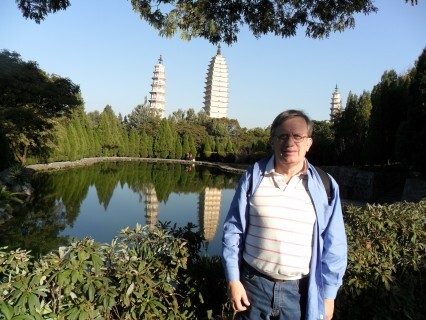 Every once in a while we passed a pool table by the side of the road. Most were surrounded by earnest-looking young men. But one table was serving as an impromptu playpen for a baby girl.
Lijiang is the ancient home to the Naxi minority ethnic group. Miraculously, its old town survived both the Cultural Revolution and China’s rapid modernization. The sturdy buildings even withstood an earthquake in 1996 that devastated a newer town nearby. Following the quake, the new town was rebuilt and the old town carefully spruced up. The effort was a huge success, earning Lijiang UNESCO World Heritage site status and making it one of China’s top tourist locations. Watching over the town is the serene Jade Dragon Snow Mountain, but Lijiang’s popularity with travelers makes for somewhat less serenity on its souvenir-shop packed streets.
Yet you don’t have to travel far in Lijiang to find a quieter experience. Before dawn, I slipped out of our hotel, climbed one of the small hills on the edge of the old town, and was rewarded with the unforgettable sight of the first morning rays lighting the misty rooftops. At the end of the 1990s, Lijiang was one of the cities that competed to be renamed Shangri-La. It didn’t succeed, although it could boast a strong connection with the fictional utopian lamasery.
From 1922 to 1949, Lijiang was the base for legendary National Geographic contributor Joseph Rock. An Austrian-American explorer, geographer, linguist, botanist, photographer, noted eccentric, and adept self-publicist, Rock’s articles and Indiana Jones-like adventures are said to have inspired James Hilton’s account of Shangri-La. So which town did get the Shangri-La name? Well, that was the place our group was headed next. 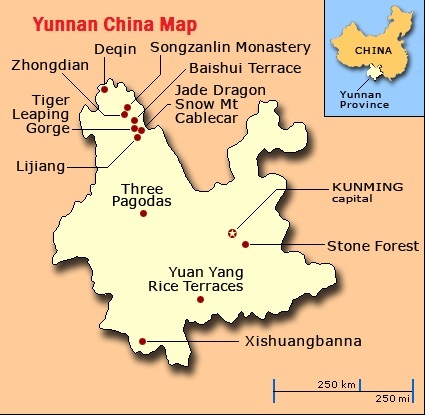 Yunnan China
Gorge Leap to Shangri-La, Yunnan China
First, however, we had to pass one of China’s most jawdropping sights: Tiger Leaping Gorge, where the churning Yangtze River passes between cliffs more than 2,000 meters high, is perhaps the deepest gorge in the world. Its name comes from the story that a tiger once leapt the gorge at its narrowest point to escape hunters. I descended the couple of hundred meters from the road to the water to see the statue of the leaping tiger. Needless to say, the climb back up was much harder, and I seriously considered using the services of the chair carriers ready to help panting tourists.
At the bottom of Tiger Leaping Gorge 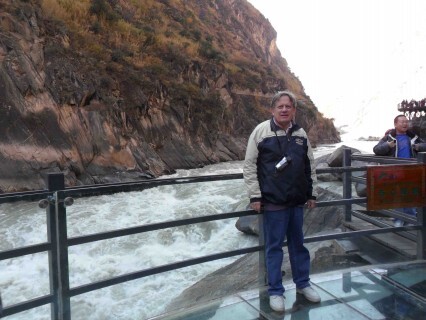 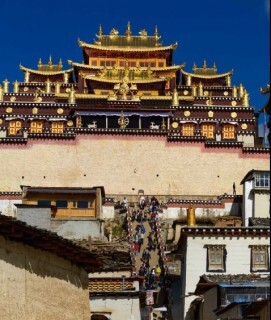 The next morning, however, was glorious—cold and crystal clear. The trinket shops were still closed, and Tibetan cowboys stood at street corners, the level morning rays lighting the smoke from their cigarettes. In one of the squares was a stupa with Tibetan prayer wheels at its base. I watched an elderly woman with a baby strapped to her back casually turn the wheels as she went past.
Our guide in Shangri-La was Nyima, a Tibetan who surprised us with his candor. He shared how his mother had passed away the previous July. “In our religion we believe in reincarnation,” Nyima said. “We are not afraid of death.” In the foothills of the Himalayas one really does feel closer to heaven. Perhaps the main reason Zhongdian was chosen as Shangri-La was the wonderful Songzanlin Monastery just outside the town, a vast temple complex clinging impossibly to the mountainside. The first part of the monastery we visited was Nyima’s village temple. It was a world away from the China of awesome energy and spectacular economic growth, “Many Chinese people come to this temple to pray,” Nyima told us, “but when they go back to the big city, they have to work hard, make money.” “They want a house. If they have a house, they want a car. If they have a car, they want more money. I believe that the purpose of life is seeking happiness.” We emerged, blinking, into the main temple courtyard to find hundreds of Tibetan prayer flags fluttering in the rarified air. A group of maroon-robed young monks were talking and laughing. At first I didn’t notice that one had a cell phone and another was wearing a bright pair of sports shoes.
Meditation and Beyond Lunch was in a Tibetan home nearby. The main room was almost completely dark. Only a few beams of light from the window caught the smoke from the fire and steam from the stew. On the way out, Nyima showed us a bright, immaculately clean meditation room near the entrance. All family members meditate for a few minutes in the morning and in the evening. “That is not our only meditation,” Nyima impressed on me. “We practice our religion at any time. If I see some glass on the ground, I throw it away. That is our religion, too. Me talking to you now is also our religion.”
On the plane home I read Hilton’s Lost Horizon straight through for the first time. The book had aged well, I thought. The world has seen much change since 1933, and China more than most places. But the search for Shangri-La seems as relevant as ever. “When he rose one morning and saw the soft lapis blue of the sky,” wrote Hilton of his novel’s protagonist, “he would not have chosen to be anywhere else on earth, in Peshawar or Piccadilly.”