Cruise to Japan with Daniel & Shirley 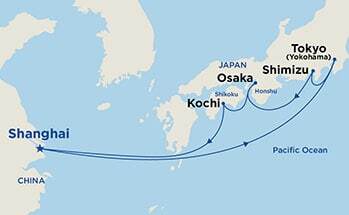 Map illustration may contain port order and/or port substitutions, please review the itinerary listing for the actual list of ports. Port arrival and departure times are approximate and subject to change without notice. For more information please review the Passage Contract.

Package starting at: $1369.00 PP* Prices based on double occupancy. Prices per person in USD.

Board your Sapphire Princess Ship in Shangai


This fabled port on the Huangpu River has played a pivotal role in the history of modern China. One of seven treaty ports inflicted by the West on Imperial China, the city was famed for the Bund, an elegant section of riverbank lined with European mercantile houses and elegant mansions. Shanghai was also the cradle of the Chinese Communist Party, and it is here that the People's Republic created its vast commercial and industrial bastion. Shanghai is also one of the most fascinating cities on the face of the earth. Its streets are packed with individuals, cars and bicycles, weaving an extraordinary tapestry of humanity. Yet serenity and beauty are always present, be it a class practicing early morning tai chi or the serene repose of the city's jade Buddha.


Shanghai's attractions are legendary, from exquisite temples and superb museums to the Bund's elegant 19th-century European architecture. The city is also your gateway to the Grand Canal and the legendary city of Suzhou.

Yokohama and Edo began life as sleepy fishing villages. That changed in the early 17th century after Tokugawa Ieyasu became Shogun. Edo became the center of political power in Japan, a position the city retained even after the restoration of Imperial rule in 1866.


Contemporary Tokyo may be the most astonishing city on earth. It's a paradoxical mix of ancient tradition and postmodern culture. The Ginza - an international shopping mecca - stands near the serene grounds of the Imperial Palace, and the hyper-speed of 21st-century consumerism is mysteriously reconciled with the elegance and serenity of traditional culture. Tokyo provides the traveler with a dizzying experience.


With the Meiji Restoration of 1868, Edo was renamed Tokyo, the "Eastern Capital," to distinguish it from the old imperial capital at Kyoto, the "Western Capital."

A mesmerizing landscape, a revered cultural history, and Japan's most sacred volcano are just a few of the many delights beckoning you to come and explore this ancient city. While Shimizu may have the reputation as being bustling and modern, its cultural and spiritual side is on display in the form of ancient and enthralling shrines. Of course, it may be the sacred and snow-capped Mount Fuji that garners the most attention. Towering over the region at approximately 12,388 feet above sea level, the active volcano, designated a "place and source of artistic inspiration" by UNESCO is just one of the many unforgettable adventures Shimizu inspires.

For centuries, Osaka was Japan's cultural and commercial gateway to Asia - the point of entry both for trade goods and, most importantly, cultural influences that shaped Japanese society. From tea to Zen, from art to science and philosophy, Osaka was Japan's contact with the great East Asian cultures that flourished in China and Korea. The city reached its zenith in the late 16th century when the great feudal lord Toyotomi Hideyoshi made Osaka his capital. Toyotomi was master of Japan, and an immense administrative and commercial center rapidly developed around Osaka Castle. After Toyotomi's death, the nation's seat of power shifted from Osaka to a sleepy little fishing village called Edo - modern Tokyo. While overshadowed by Tokyo, Osaka remains Japan's second-largest city and a vital commercial center.

Modern Osaka is home to monuments from Japan's past including Toyotomi's immense castle and the Sumiyoshi Shrine. The city is also your gateway to Kyoto, Japan's ancient imperial capital and the nation's cultural and spiritual center.

Kochi sits on the broad alluvial plain facing Urado Bay. This city in Shikoku takes its name from the great feudal castle that sits at its very heart. Completed in 1611, Kochi Castle was the seat of Yamauchi Kazutoyo, a noted warrior who supported Tokugawa Ieyasu in his successful quest to become Shogun. Tosa Province and Kochi Castle were Yamauchi's reward for faithful service. There is a historical irony here: 250 years later, a Kochi native son - a former low-ranked samurai and now ronin named Sakamoto Ryoma - played a pivotal role in bringing the Tokugawa Shogunate to an end and restoring the Emperor of Japan to political prominence. The prize once awarded for faithful service had become a hotbed of support for the Meiji Restoration.


Kochi is one of the wettest places in Japan - and a frequent target for cyclonic storms or typhoons. Southeast of the city, warm oceans currents washing against the Aki Mountains create a subtropical landscape of hibiscus, palm and ficus at Muroto-Anan Quasi-National Park.


Arrive: Shanghai, disembark and fly home or extend your trip in China

*Please note that prices are listed per person, non-air cruise-only and based on double occupancy. Third and Fourth guest fares apply to the 3rd and 4th guests booked in the same stateroom as the First and Second guests. Launch Fares are offering fares and may not have been in effect for the past 90 days or resulted in actual sales in all categories. Intermediate discounts may have been taken and fares may remain at discounted levels after this promotion. Taxes, Fees & Port Expenses are subject to change and Princess reserves the right to collect any increases in effect at the time of sailing even if the fare has already been paid in full. Prices are subject to change based on availability. Stateroom views are considered unobstructed unless noted otherwise. Photos, floor plan diagrams, and amenities represent typical arrangements and may vary by ship and stateroom. Certain staterooms may vary in size, decor and configuration. Obstructions do not include certain nautical items like handrails, dividers or ship hardware. For balcony staterooms, the view is determined from the perspective of the balcony railing. Prices shown in USD. Please review Passage Contract for Cancellation Policy.


††FREE Gratuities are based on the pre-payment, by Princess Cruises, on behalf of the guest for the suggested gratuities in the U.S. dollar amounts of $14.50 per guest per day for Interior, Oceanview, and Balcony staterooms, $15.50 per person per day for Mini-suite and Club Class staterooms and $16.50 per guest per day for Suites. This amount is paid on the behalf of all guests (up to 4) in a stateroom only. Free gratuities do not include gratuities added to bar charges, dining room wine accounts or Lotus Spa services. Gratuities are not transferable, nonrefundable, have no cash value and may not be combinable with other select offers or other onboard credit.

‡FREE Stateroom Location Upgrade applies to booking the stateroom location you wish to sail in for the price of the lowest category within that stateroom type (Interior to Interior, Oceanview to Oceanview, Balcony to Balcony). Upgrade offer excludes select categories, including, but not limited to, premium categories and suites. Offer does not apply to the land portion of a cruise tour.


‡‡FREE Onboard Spending Money up to $800 offer is applicable to all guests (up to 4) in a stateroom. Guests with single occupancy will receive double the per guest credit amount. Spending money may be used on a single voyage only, is not redeemable for cash, and cannot be used in the casino and expires at the end of that voyage.


FREE onboard spending money per guest, for all 4 guests


*Fares apply to minimum lead-in categories on a space-available basis at time of booking. Fares for other categories may vary. Fares are per guest, non-air, cruise- or cruise tour-only, based on double occupancy and apply to the first two guests in a stateroom. These fares do not apply to singles or third/fourth-berth guests. This offer has limited space regardless of cabin availability and may not be combinable with any other public, group or past guest offers, including Air discounts. Offer is available to residents of the 50 United States, Canada, Puerto Rico, Mexico, Bermuda and the District of Columbia who are 21 years of age or older and receives this offer. Fares quoted U.S. dollars.

Deposit of 10% per guest made under 3 for FREE is non-refundable.

Terms, conditions and restrictions apply; pricing, availability, and other details subject to change and/ or apply to US or Canadian residents. Please confirm details and booking information with your travel advisor.

"Cruise to Japan with Daniel & Shirley"

8 Facts About the Panama Canal

Top 6 Wellness and Fitness Cruises You Should be Booking Now