On December 4, 2021, a total Solar Eclipse will occur in the Scotia Sea around the South Orkney Islands, near the Antarctic Peninsula. This phenomenon won’t occur here again for another 400-or-so years. Seize this rare chance and join a Hurtigruten expedition cruise to Antarctica during the total Solar Eclipse, an opportunity that arises only once in several lifetimes.

Where will it happen?

For 2021, the total Solar Eclipse will only be observable around Antarctica. We plan to experience it in the Scotia Sea near the South Orkney Islands, a group of four islands about 600 km (just over 370 miles) northeast of the Antarctic Peninsula.
After observing the Solar Eclipse, we aim to explore the South Orkney Islands themselves. 85% of the islands’ surface is made up of glaciers, which makes them the perfect habitat for various species of penguins and seals. We will attempt to navigate a route through the area’s icebergs, sea ice, and occasional mist, allowing you to participate in landings ashore and other activities.

The decks of expedition ships MS Fram or MS Roald Amundsen, which are positioned in the waters near the South Orkney Islands, are the ideal place for front-row seats to the upcoming total Solar Eclipse. 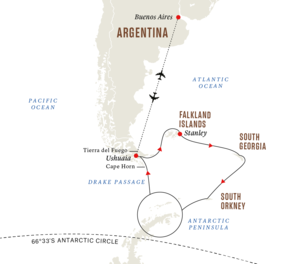 The Ultimate Expedition and Solar Eclipse>>

Antarctica, Falklands, South Georgia
Join us for a fantastic expedition cruise to the Falklands, untouched South Georgia and experience a total Solar Eclipse from the South Orkney Islands before our ultimate exploration of Antarctica.
23 days  |  November 22, 2021 | ⛴ MS Fram 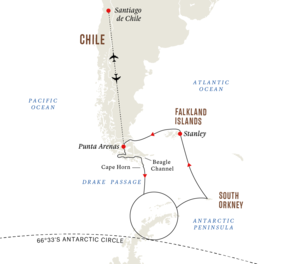 Antarctica, Chilean Fjords and Falklands
Sail in the wake of the great explorers to experience the Chilean fjords, majestic Antarctica and experience a total Solar Eclipse from the South Orkney Islands before heading to the Falkland Islands.
18 days  | November 24, 2021  |  ⛴MS Roald Amundsen
As part of your cruise with us, the Expedition Team will give out special-purpose solar filter sunglasses designed specifically to protect your eyes from harmful ultraviolet and infrared rays. A professional astronomer will also be part of the Expedition Team for the full duration of the cruise, delivering a series of in-depth lectures on this extraordinary occurrence and providing insights during the eclipse itself.
In addition, you’ll receive tips and ideas from professional onboard photographers on how to capture the spectacular event. They will also be sure to shoot the Solar Eclipse from more than one angle and even film with drones if conditions allow. Later on, you’ll be able to access their footage and share it with your friends and family back home.
This eclipse will also be a little unusual as the path of the total eclipse will move from east to west, which is the opposite direction to most other eclipses and a feature unique to observing it in the polar regions.
Should weather prevent us from observing the eclipse directly, you will still be able to experience a distinct moment of darkness for the duration of the eclipse. It will seem as if the whole world has stood still in reverence of this phenomenon. These are moments that you’ll never forget.